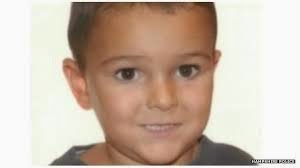 Ashya King is a 5 year old boy who suffers from a brain tumour.  He was undergoing treatment at Southampton General Hospital.  According to an article in the Southern Daily Echo 29th August, Ashya was a "long term patient who was permitted to leave the ward under the supervision of his parents as part of his ongoing rehabilitation.  When the length of time he had been absent became a cause of concern to hospital staff ... they contacted police after a search of the site and attempts to contact the family were unsuccessful."  It appears that the parents were hoping to obtain a treatment (proton beam therapy) for Ashya's condition that is available in some European countries but not in the UK.

The Police eventually obtained a European Arrest Warrant (EAW) (to which Part 3 of the Extradition Act 2003 applies) having discovered that Aysha had been taken, via France, to Spain.   Issues relating to "neglect" were reported to be a basis for the EAW but precise details of any alleged offence were not stated publicly.  Portsmouth Council also took out wardship proceedings in the High Court - see the Order of 29th August. In accordance with the EAW, the parents were arrested in Spain and held in custody.

The European Arrest Warrant was introduced into our domestic law in 2004 under the Extradition Act 2003 which implemented the EU Framework Decision of 2002.  Euromove website has a good article about the EAW which sets out clearly the benefits of the EAW and also concerns that arose about its practical operation.  Fair Trials International has continually pressed for improvements to the EAW process.  (Further discussion, in the context of the UK's "opt-out" and "opt-back-in" to certain EU criminal justice measures, may be read at Big Brother Watch Parliamentary Briefing).   One serious concern with these warrants related to a certain lack of proportionality that appeared in some cases.  The Anti-Social Behaviour, Crime and Policing Act 2014 Part 12 was enacted to introduce a proportionality test for extraditions from the UK.  The introduction of this test met with some opposition within the EU.

The Police apply to the Crown Prosecution Service (CPS) for a EAW to be issued.  The CPS website informs us that - "For requests to both category 1 and 2 territories CPS lawyers only prepare an extradition request after considering the Code Tests (see the Code for Crown Prosecutors in the Legal Resources section). A request can be made for any of the following three purposes: to prosecute the wanted person for offences stated in the request; to sentence the person for offences noted in the request that the person has already been convicted of; and, to carry out a sentence on the person that has already been imposed in respect of offences noted in the request."  The requirement to consider the Code Test is also referred to in this Association of Chief Police Officers (ACPO) document at page 4.  It is far from clear just how the Code Test was met in Ashya's case but, regrettably, full information about this has not be made public.

The use of the EAW in Ashya's case attracted massive media coverage.  One notable contribution was that of Mr John Cooper QC - The Guardian 1st September where Cooper stated that the EAW clearly required criminal proceedings to have been issued.  He asked - "So what proceedings were ongoing? No doubt this is a question the parents may ask in the future and they consider whether the police lawfully deprived them of their liberty."


It now appears that the CPS are going to withdraw the EAW - Brief Statement by CPS - and a hearing took place today in the High Court before Mr Justice Baker with regard to the wardship proceedings.  The court will be particularly interested to know the views of the parents and any plans in place (or likely to be in place) for the treatment of Ashya.

The CPS issued a statement relating to the withdrawal of the EAW.  This states that, in the light of further evidence, the CPS considers that there is insufficient evidence for a real prospect of conviction for any criminal offence.  The CPS referred to "reasonable suspicion" that the parents had committed "an offence of child cruelty through wilful neglect" but finally concluded that wilful neglect could not be proved to the required standard.


- European Arrest Warrant And Other Eu Measures
Update 11th November:  The Criminal Justice and Data Protection Regulations were approved in the House of Commons. This completed the transposition into domestic law of 11 of the 35 measures that the government wished to retain.  The debate...

- Eu ~ Lisbon Treaty ~ The Bloc Opt-out And Selective Opt-back-in
"Whether EU measures covered by the so-called '2014 block opt-out decision' continue to apply to the United Kingdom and become subject to the jurisdiction of the Court of Justice from 1 December 2014 is a profoundly significant issue. Some?including...

- Charge On The Basis Of "reasonable Suspicion"
20th September 2011: "Stepping Hill nurse criticises media over arrest charge" - The Guardian.  Miss Leighton says that, at first, she did not opt for legal advice but points out that she was advised to do so by the Police.   Legal advice...