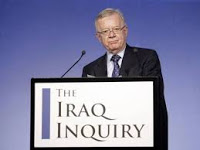 The Iraq Inquiry was set up in 2009 under the Chairmanship of Sir John Chilcot.  It is a committee of Privy Counsellors tasked with considering the period from the summer of 2001 to the end of July 2009, embracing the run-up to the conflict in Iraq, the military action and its aftermath.

Sir John gave evidence to the House of Commons Foreign Affairs Committee in February 2015 - view the session.  He explained that rigour was necessary in establishing the facts and producing the report.  The inquiry was of unprecedented scope (covering an 8 year period) and a reliable account was required.  Over 150 witnesses had given evidence and over 150,000 government documents had to be examined.  There had been difficulties with the release of some material, notably communications between Prime Minister Tony Blair and President G W Bush, but those matters had been dealt with by September 2014.  After that, the process known as "Maxwellisation" could begin and Sir John clearly saw this as an essential step in ensuring the rigour of the final report.  In his evidence to the committee, Sir John would not say how many individuals were involved in "Maxwellisation."  It was necessary to allow a "reasonable time" - but not indefinite time - to deal with this and the time scale might depend on the precise nature of criticisms addressed to individuals.

It is reported that legal action is now under consideration to require Sir John to bring the inquiry to an end - BBC News 13th August - Iraq Inquiry: Soldiers' families threaten to sue Chilcot.  Lawyers for the soldiers' families claim he acted unlawfully by refusing to set a deadline for publication.  As yet, there is no response from Sir John to this development.

The process takes its name from the late businessman Robert Maxwell.  Maxwell took issue against inspectors appointed to examine the affairs of one his limited companies.  The Inspectors acted under the Companies Act 1948 s.165 and reported critically about Maxwell.  After some judicial disagreement in the High Court, the Court of Appeal (Lord Denning MR, Orr and Lawson LJJ) unanimously held that in this form of inquiry:

"it was sufficient for the inspectors to put to witnesses what had been said against them by other persons or in documents to enable them to deal with those criticisms in the course of the inquiry; that it was not necessary for the inspectors to put their tentative conclusions to the witnesses in order to give them an opportunity to refute them and that the inspectors had not given any undertaking to do so in the present case; that the inspectors had acted with conspicuous fairness in their conduct of the investigation as a whole and had put to the plaintiff all the matters which appeared to call for an answer; and that as they had acted honestly and fairly their report was not to be impugned."

The "Maxwellisation" process is embedded in the psyche of those concerned with inquiries and it has been applied in subsequent inquiries such as the BCCI Inquiry (Chairman Lord Justice Bingham) and the Arms to Iraq Inquiry (Chairman Lord Justice Scott).  Essentially, it is basic principle of the common law that proceedings before courts, tribunals and inquiries are "fair."  Hence, those appearing before inquiries should be informed of any allegations made against them (see the Six Principles set out by Salmon LJ in his report into the Tribunals of Inquiry (Evidence) Act 1921).  Cases such as that involving Robert Maxwell have insisted on fairness to those against whom there may be critical findings but precisely what is required to achieve that fairness appears to depend on the circumstances.  The company inspectors merely had to put their tentative conclusions to Maxwell and give him an opportunity to refute them.

Sir John indicated to the Commons Committee that he had considered the Inquiries Act 2005 procedure as set out in the Inquiries Rules 2006 Rules 13-16.  The rules do not apply to the Iraq Inquiry since it is not being held under the Act.  Nevertheless, the rules are a statutory form of "maxwellisation" in that those likely to be criticised have to be informed etc.  No time limit is specified for this process.

What may happen next?

Certainly, Maxwellisation cannot be an open-ended process or an inquiry would never be able to report.  As Lord Denning put it in his judgment in the Maxwell case, the aim is not "to make a lawyer's holiday."

Ultimately, the question seems to be what is a "reasonable time" for the process.  That must, as Sir John indicated to the House of Commons, depend on the precise situation.  Who then is to judge that?  The answer must be those who have ALL the detail.  In other words, the inquiry itself.

It may be that the political process will bring sufficient pressure to bear to bring the process to an end but that might then be seen as risking the political independence of the inquiry and the Inquiry Team may not wish to place their signatures on a report which they somehow see as unsatisfactory.

It seems unlikely that the courts would wish to be seen as dictating the timetable though the court may choose to expand upon what the process of fairness requires.  Essentially it seems to require that individuals have the opportunity to address the substance or core of any criticism rather than to address "chapter and verse" all the detail as if there is some form of subsidiary "trial" relating to that witness.

"To borrow from Shakespeare, he is not to have "all his faults observed, set in a notebook, learn'd, and conn'd by rote," to make a lawyer's holiday" - per Lord Denning MR in Maxwell v Department of Trade and Industry 1974.  The quotation is from Julius Caesar Act 4 Scene 3.

Daily Mail 21st August - Lord Morris. These tragic families of those killed in Iraq deserve better. the author is Lord Morris of Aberavon who was Attorney-General from 1997 to 1999.  Morris is critical of (a) the very wide terms of reference given to Chilcot; (b) the fact that the inquiry is not a statutory one led by a judge with counsel to conduct cross-examination and (c) Chilcot has "elevated Maxwellisation into a central feature of his inquiry."

- Litvinenko - A Public Inquiry To Be Held Under The Inquries Act 2005
On 22nd July, the Home Secretary decided that there should be an inquiry under the Inquiries Act 2005 into the death, in 2006, of Alexander Litvinenko - (BBC News 22nd July).  As a result, the inquest first established in 2006 has been suspended...

- Impeachment - If It Is Not Obsolete Then It Should Be !
Impeachment of Warren HastingsAddendum: 27th June - Chilcot Report into 2003 Iraq invasion hit by further delay Not for the first time, there has been a call for the Impeachment of former Prime Minister Tony Blair who, it is alleged, misled Parliament...

- Brief Notes On The Azelle Rodney Inquiry
Update 31st July 2014 - The former Police Officer, referred to as E7, has been charged with the murder of Azelle Rodney.  See the Crown Prosecution Service announcement on this. In April 2005, Azelle Rodney (then aged 24) was shot by the Metropolitan...

- Judges And Inquiries
From time-to-time the use of Judges to chair inquiries has been criticised but their use has continued.  Writing in The Times (17th June - "The high price to be paid if judges examine our historical events") Lord Pannick QC points out that Ministers...