﻿ The Pro and Con of Class Action Cases
Law and Rights

The Pro and Con of Class Action Cases

We recently wrote about Toyota's acceleration problems and why a class action may not work for some people, as a way to resolve their own situation here: http://ohiolemonlaw.blogspot.com/2010/02/toyotas-problem-and-why-class-action.html
Before deciding on starting, or joining, any class action, you have to ask yourself what your goals are in the dispute. There are both advantages and disadvantages of handling your consumer dispute in a class action approach instead of an individual "just me" approach.
The advantages are pretty obvious and it generally flows from the "strength in numbers" approach. If a large group of people have the same legal rights, being able to let many of those people testify in the same court case can help convince a jury that what they are saying is true and they deserve to have compensation for the problem. Also, if what you want to do is stand up for the "little guy" who can't afford either the money or the time it takes to wage such a fight, then that's another reason. Principles can be powerful motivators for justice.
On the other hand, perhaps the actual injury to each person is very small and it's not worth fighting over for just one person to take it on. For instance, there was a large insurance company that had a rule to just deny all claims under $50 including legitimate ones, simply because people would never pursue the insurance company over it. Also, there's the famous baby food case where a large manufacturer was labeling its flavored tap water as apple juice when it was really no such thing at all, but at 35 cents a bottle, no one would have made a lawsuit out of it. In those cases, a class action may be the only way to curb corporate greed and hold them accountable to everyone that was ripped off.
There's also the case of the victims who still don't know they are victims at all. That's where most of the apple juice victims were. They had paid for it but never even realized they were ripped off. A class action in the legal system may be the only way those people ever have a chance to get their money back. Otherwise, large companies would have no incentive to be honest and fair in even the smallest transaction.
No question about it. Sometimes a class action is both necessary and appropriate in many kinds of situations. But sometimes it isn't.
For some people, they just want their own situation resolved. They often believe that life is tough enough without taking on a "holy war" over a small amount of money or one that may take years to fight through. To them, it's simply isn't worth it.
Class actions sometimes carry some unwanted publicity too, and that has to be considered.
For some folks they just want to be treated fairly and honestly and go to work every day and just live their life, so to speak. To be sure, they don't want to be taken advantage of, but they often believe that "it all comes out even in the end" and they just want their family and their life to be okay.
For those folks, a class action is not cost effective because their goal is to get their life back to normal and to get their own justice and let the "other guy" take care of his own problems. There's nothing wrong with that either.
But before starting a class action, the consumer needs to think all this through carefully. That includes the time delay of getting something, which a class action can add to the process, when the amount the individual consumer gets may not be all that much. Because the amount to Toyota, for instance, may ultimately amount to huge numbers, it would be reasonable to expect that they will likely fight class action cases extremely hard. That's what that California insurance company did, for example. Here's a real illustration. 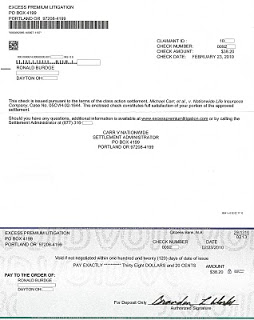 In 2005 a class action was filed against Nationwide Life Insurance Company, alleging they had slightly overbilled policyholders on their premiums. After five years of litigation, the case finally settled and we just got our settlement check. $38.20. Here's a copy of the check, so you can see this story is real.
Now, we wouldn't have filed our own lawsuit over $38.20. And some companies depend on that when they do what they do to people, and sometimes it's just a stupid error that they never made right. But it's only $38.20. And it took five years to get it. Now to Nationwide, it amounted to a whole lot of money being given back to a whole lot of people. But to us, it was just $38.20. A class action, we think, was necessary there to get that done. Besides, it wasn't hurting us to wait for it. It wasn't like we were thinking about it every time we got in our car and turned on the ignition. But then there's the Toyota mess.
How much will Toyota owners in those now-over 60 class actions end up actually getting in their pocket when it's all over with? Who knows. But you can bet it'll take years to get it. Sometimes you're better off taking a little less and getting it right now. That's what some consumers think too. And you can't blame them.
They thought Toyota cars and trucks were built well, reliable, and backed by a company that cared about their customers more than American-based manufacturers seemed to. that was a reasonable thought at the time but, in retrospect, it may not have been correct. And now, even with that new dime-size shim piece sitting behind the gas pedal, they still can't be sure what is really going on. No one is saying that little piece is the real answer. One now-famous professor spent 3 hours and showed how it had probably had nothing to do with the real acceleration problem at all.
So if you own a Toyota do you want to just get it over with, and soon?
If so, a class action may not be the best answer to that. You may be better off just fighting your own case and trying to get your own life back to normal for you and your family, as soon as you can. Whether you ever buy another Toyota anytime soon, well, that's another question. And only you can answer it.
We generally have several class actions going on at any one time, including right now, and we believe a class action is often necessary to get the best result for the most people, as cost effectively as possible. But the client has to decide carefully if that is what they want to do. If so, then we can help. If not, well, that's okay because we handle individual cases too.
Burdge Law Office
http://www.ohiolemonlaw.com/
Because life's too short to drive a lemon.
Whether Toyota made it or someone else did.


- Paypal Just Ripped You Off
PayPal Rips Off Your RightsIf you are like millions of other folks out there, you probably have used PayPal online. The idea is great, but the details just ripped you off today - they stole your legal rights and you probably didn't even know it. Most...

- Toyota Knew Of Unintended Acceleration In 2003, Lawsuit Claims
The Washington Post is reporting that the class action case lawyers are saying that they have uncovered internal Toyota documents showing that as far back as 2003 the company knew about the problem of unintended acceleration in Toyota cars. Apparently...

- Toyota News Gets Worse By The Day
Seems like everyday is worse than the day before for Toyota. The company president, Toyoda, is not looking forward to showing up in front of Congressional investigator committees, no doubt. AOL's Daily Finance is reporting the company apparently bargained...

- Feds Say Don't Drive Your Toyota
The US Transportation Secretary, Ray LaHood, just said he is advising owners of the recalled Toyotas to stop driving them and wait for the repairs. He testified minutes ago before the House Appropriations subcommittee on transportation and said his advice...

- Is Toyota Closer To Fixing The Gas Pedal Recall
Maybe. Maybe not. Toyota says they have found a solution and lots of woners are hoping so as they are stuck in neutral waiting to find out for sure. Is your Toyota safe to drive? And what should you do if the uncontrollable acceleration happens to you...